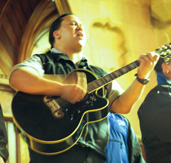 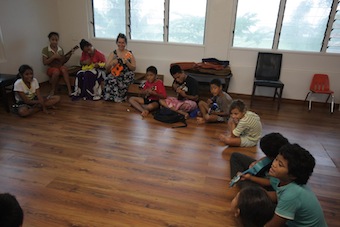 Poutasi Village was one of many villages that was devastated by the Tsunami of 2009. Loved ones were lost as well as the primary school and many other important gathering places. The chief of the region is Joe Annandale, who was educated in New Zealand. Many of his old friends from around the world came together to support Joe in leading the re-building of Poutasi Village, and have generously helped to create a new community centre, a rugby field, a pre-school and an arts centre.

Joe and his team have a vision to make Poutasi Village a centre for art, culture and education, where the traditional way of life in Samoa can be sustained by adding income from tourism, and where people will be able to stay on their traditional lands instead of having to leave for the city and overseas.

Part of this vision is to have a music school. The music school was launched in January 2009 when two New Zealand women, Claire Cavanagh and Eileen Reid, spent 12 weeks teaching the young people of the village how to play ukulele and guitar. In July 2012, Claire returned, followed by Nikki Berry and Gary Easterbrook to continue with the project. Two young men from the village have now stepped up to take up the reins of the

music school and the older children who first learnt in 2009 are also teaching the younger children. The Muse raised funds to send over a bunch of ukuleles and guitars and the young people are very much enjoying them.

The best way to help now is for travelling teachers to visit them and give them some input. 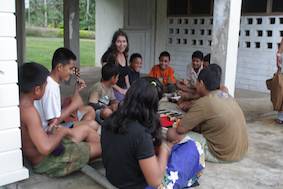